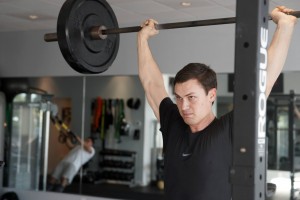 Olympic weightlifting has seen significant resurgence of late due to its powerful ability to get you in shape fast. Here’s a primer on the old-is-new-again approach to training.

Olympic Weightlifting Basics
Weightlifting (Olympic style) is a sport that utilizes a barbell and consists of two competition lifts: The snatch and the clean and jerk. The goal of the snatch is to pull the bar as high as possible while quickly dropping underneath the weight to catch it with straight arms overhead and stand up. The clean and jerk consists of two separate movements. First, you perform the clean by pulling and dropping underneath the weight, catching it on the shoulders and standing up. Second, you perform the jerk by dipping and driving the weight upward off the shoulders and pressing it up overhead.

Who Is Weightlifting Good For?
Weightlifting great for anyone interested in competing in the sport, as well as any athlete from another sport looking for cross-training. It can also benefit anyone with an open mind and an able body looking to pick up a new skill-set.

My Experiences in Weightlifting
I began weightlifting non-competitively back in high school while I used to play football. The years after football I practiced the lifts casually, but it wasn’t until Spring of 2014 that I decided to train for competition. It has helped me in almost all areas of my athleticism and I am the strongest I have ever been in my life.

Where to Start Weightlifting?
I host weightlifting training sessions with fellow coach Travis Parkyn at Bird Rock Fit Mondays and Wednesday at 6pm, and Saturdays at 12pm with Andrew Swasey and Travis Parkyn. Your first session is free. Email me at andrew@birdrockfit.com to get started.